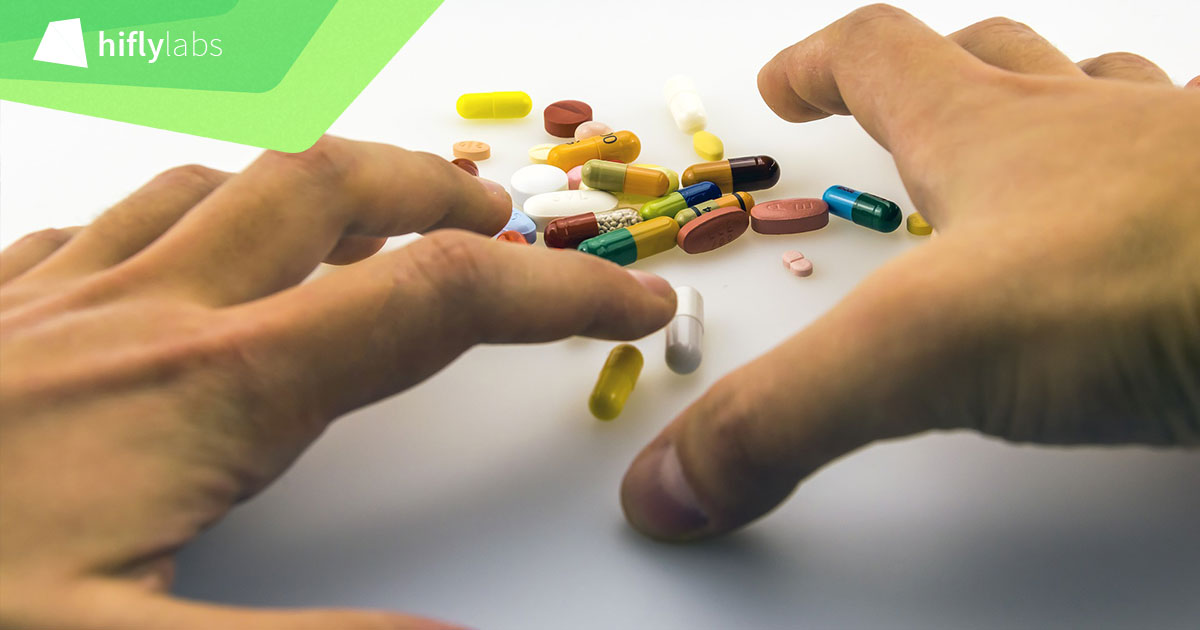 The turnover of subsidized prescription medicine in Hungary was HUF 559 billion in 2020. A total of 185 million boxes of medicine were sold domestically last year.

The year 2020 was deeply affected by the outbreak of the coronavirus epidemic in Hungary in March. We had seen an unprecedented “pharmacy rush” in March and then experienced a slight recovery in the freer summer months. Towards the end of the year, the protracted curfew resulted in steady medicine sales. Overall, we can say that the trend of the 7-year expansion of subsidized prescription sales continued in the year of the coronavirus, although this sales growth was coupled with stagnant box purchases.

In the last month of the year, in December, sales of HUF 47.6 billion were almost the same as the monthly output of HUF 47.7 billion in November. The weaker sales are due to the fact that people spent much less on medicine in the Christmas month than usual. At the same time, the sales of prescription pharmaceutical medicine were HUF 558.7 billion in 2020. The turnover value in 2020 increased by 5.2 percent compared to the HUF 531.3 billion in 2019. Last year’s turnover can be considered as a previously unmeasured result based on statistics from recent years. After 2019, last year’s prescription pharmaceutical turnover was able to exceed the sales of HUF 501.7 billion in 2011, which had been peaking for years until 2019.

However, over the past few years, there has been a divergence between the growth rates of turnover and the number of boxes sold. Producer and purchase prices of medicines are rising year by year, but the number of patients has remained virtually unchanged for years. This trend is reinforced by the fact that the Hungarian population is dwindling, but also aging, and this process somewhat balances the number of medicine boxes sold. In contrast to the 5.2 percent increase in sales, the number of boxes sold increased by only 1.9 percent in 2020 compared to the previous year. True, last year, pharmacies sold 4 million more boxes of medicine in volume than in 2019. In 2020, a total of 185 million prescription drugs were sold in Hungary, compared to 181 million in 2019.

The growth gap between turnover and the number of boxes sold is well illustrated by the fact that while the average turnover per box sold in 2006 was HUF 2,175, this value was already around HUF 3,020 last year. In a market economy, the prices of products change constantly, some go up, others go down. However, these phenomena are not clearly observed in the subsidized prescription medicine market.

“The subsidized prescription medicine market is not a regular market in many ways. Unlike other markets, prices here are not purely determined by supply and demand but are set by the appropriate authorities. Based on the data, it can be concluded that the population can only buy subsidized prescription drugs at a higher price from year to year, which, fortunately, is followed by the level of state subsidies in parallel. ” – says Zsolt Virág, President of the Board at Hiflylabs, the company that completed the data analysis.

Examining the regional distribution of pharmaceutical turnover, we could see that purchasing data developed with a small difference, but in proportion to the population. In 2020, almost a third of total sales were generated by the center of the country, Budapest and Pest counties. It is also worth mentioning the performance of the more populous counties of Eastern Hungary, Borsod-Abaúj-Zemplén, Hajdú-Bihar, and Szabolcs-Szatmár-Bereg, which added above 5% to the market share of sales of the country. The smallest share of national medicine sales was measured in Komárom-Esztergom, Tolna, and Nógrád counties last year. The turnover contribution may have been affected by whether the county has a large hospital and the general health condition of the population.

The emerging coronavirus epidemic in 2020 also had a significant impact on county processes. At the regional level, the biggest winners of the pandemic are the pharmacies in Pest County, where the turnover of pharmaceuticals increased by 10.7 percent compared to 2019. The significant increase is due to the so-called agglomeration effect, which already appeared in the months affected by the curfew last year. In 2020, people of Pest County who had previously bought in Budapest purchased their medicine in pharmacies close to their places of residence due to curfew regulations and the spread of home office. The agglomeration effect was also strong in Heves and Fejér counties, with the former measuring 8.3 percent and the latter 7.4 percent in 2020 compared to the previous year. In contrast, the big loser in regional reorganization last year was the capital. Prescription drug sales in Budapest pharmacies were only 1.4 percent higher than in 2019.

In the annual data, it is particularly interesting to examine how the coronavirus changed the performance of the Lake Balaton region in 2020. A part of the population spent a much longer time than usual at Lake Balaton to avoid outbreak zones. According to the annual data, the pharmacies of Somogy county were able to increase their turnover in 2020 by 8.2 percent, and the pharmacies of Veszprém by 7.4 percent, compared to the previous year. 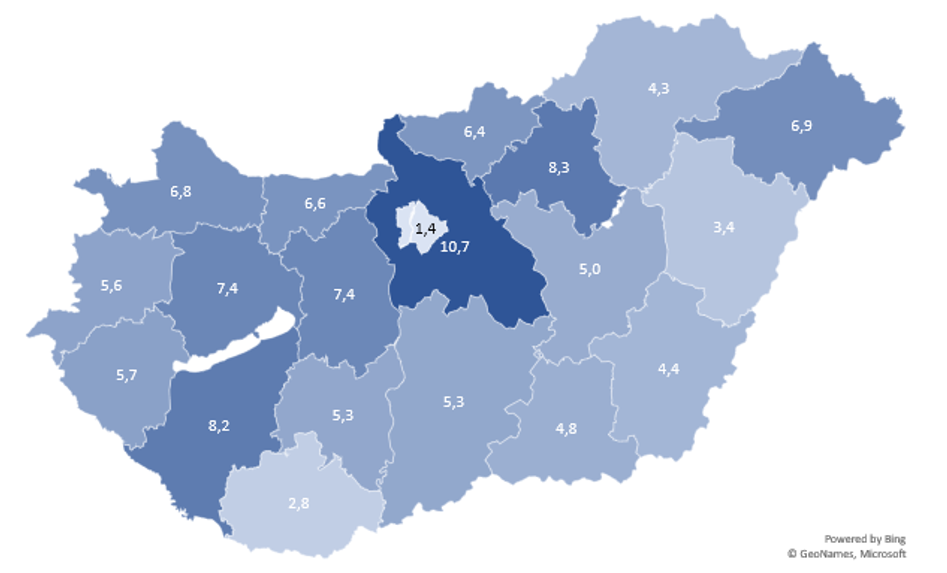 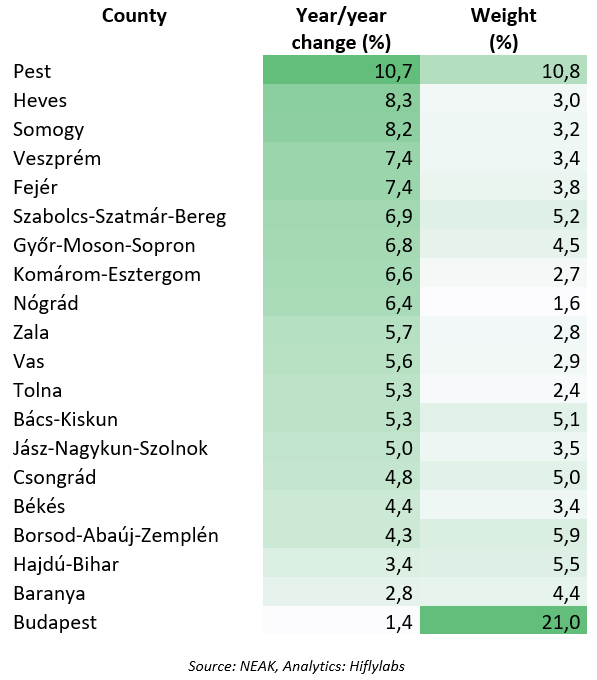 In the case of pharmaceutical sales, the question may rightly arise as to what proportion of the social system finances the prescription medicine expenses of its patients. In 2020, 67.5 percent of prescription drug sales benefited from social security support, however, the level of support varies by product type. Extremely expensive anticancer drugs have the highest rates of social insurance support, as the supply system for these medicine covers almost the full cost. The lowest support is for antiparasitic drugs, where the state assumes only one-third of the price of prescription drugs. The former group includes chemotherapeutic drugs, the latter mainly infectious animal unicellular agents. 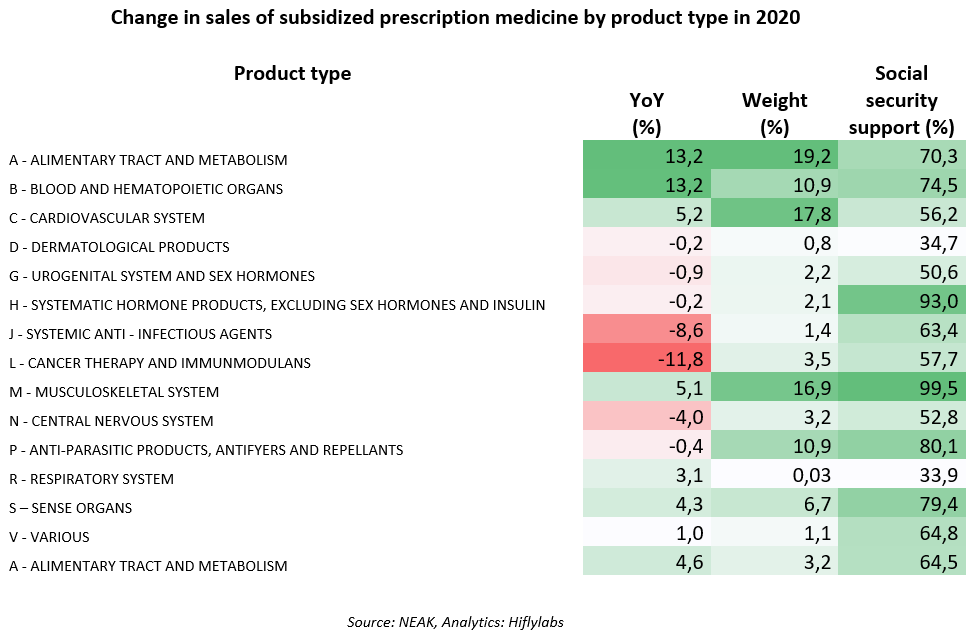 Looking ahead to next month, we expect the most stagnant pharmaceutical sales results in January 2021 compared to December. The first months of the year are usually determined by a strong flu epidemic, however, due to curfew regulations, the flu season may be delayed in 2021. According to the official announcement of the National Public Health and Medical Officer Service, flu cases in Hungary may have decreased by a quarter in January compared to previous years. Regarding the sales performance in 2021, growth in purchases is expected, however, the growth rate is expected to slow down. Due to an aging population, improving health awareness, and the development of health technology, sales could increase further in 2021, even if there are no booms like in 2020.

Author:
Zsolt Virág – President of the Board at Hiflylabs Zrt.