In the autumn, there is no sign of panic-like medicine shopping, but purchases are diverted to the countryside, many people stayed at Lake Balaton as well.

Although the second wave of the coronavirus has brought much more severe numbers of patients, there is no sign of spring medicine accumulation fever in the autumn. The turnover of subsidized prescription medicine for October, both in terms of number and sales volume, lags behind the September values ​​and the data of the same period of the previous year.

However, there is a little similarity between the medicine turnover trends of the two coronavirus waves. In the first month of both the spring and autumn coronavirus waves, there was a surge in consumption, followed by a correction in the second month, but overall, the differences tend to dominate when comparing the two waves. “During the second wave of the coronavirus, consumption is much more balanced, barely exceeding the normal monthly fluctuations in medicine turnover, and the average drug consumption during the second wave is also much lower than the values ​​recorded during the first wave.” – says Zsolt Virág, expert at Hiflylabs, the company that completed the data analysis.

In October 2020, the turnover of subsidized prescription medicine was only HUF 46.9 billion, which means a 1.4 per cent decrease compared to September and a 1.1 per cent slowdown compared to the same period of the previous year. However, the annual cumulated turnover is still relatively high, with the turnover value recorded in the period from January to October exceeding the same period in 2019 by 5.1 per cent. The number of boxes of products sold shows a more independent value than the price effect, which is slightly lower than the sales volume. “The number of boxes of medicines sold in the first 10 months of the year is only 2 percent higher than in the same period last year, which can be considered as a low value in light of the spring drug purchase wave.” – says Zsolt Virág. 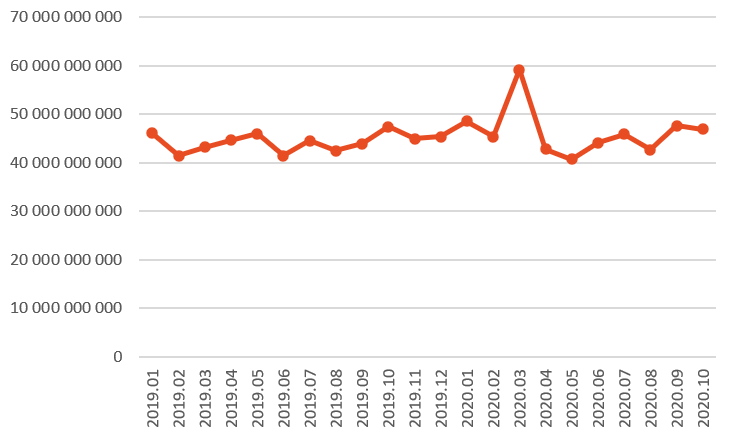 However, the regional distribution of pharmaceutical turnover is highly similar to the situation in the spring. Due to home office, a significant part of sales of the capital was diverted to the countryside. Within that, the purchases of the agglomeration around Budapest increased significantly, but even in October, the positive fluctuation of the purchases around Lake Balaton was extremely significant. Due to the agglomeration effect, the turnover in Pest County was able to increase in October as well, even though the turnover measured at a national level for the same period of the previous year decreased. The sales of products also increased near Lake Balaton and in Heves county, in all other counties the number of purchases is decreasing. The largest decrease can be measured in Budapest, the turnover of subsidized prescription medicine in the capital is almost 6 percent lower compared to October 2019.

Examination of the change in the turnover of medicine categories shows well the indirect effects of the coronavirus epidemic. The turnover of systemic anti-infectives decreased significantly both compared to September and compared to the same period of the previous year. This category includes, but is not limited to, antibiotics and antivirals. The decline in the category is due, on the one hand, to social distancing, as contagious diseases are less prevalent than in previous years, and, on the other hand, there are fewer doctor visits for less several diseases. In contrast, sales of products with the largest weight, i.e. products for the gastrointestinal tract and metabolism, increased. This category is dominated by sales of antidiabetic drugs and antacids, but prescription vitamins also added to the growth of purchases in this category. The purchases of prescription vitamin D has increased significantly as a result of the coronavirus. In October 2020, sales of prescription vitamins nearly doubled the 2019 monthly average. Compared to the same period last year, the turnover of antithrombotic agents increased significantly, too. This is partly the result of a long-term trend, but the risk of thrombosis is also increased by the coronavirus, so the increase in turnover is caused by both the coronavirus and the general increasing trend in product turnover.

Proportion of people over 65 (2020) and turnover of prescription medicine per capita (number of boxes, from January to October 2020) 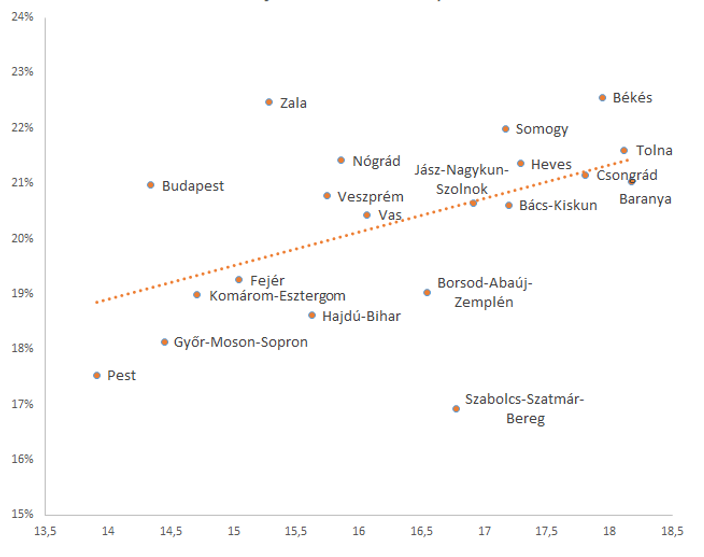 Authors:
Zsolt Virág – President of the Board at Hiflylabs Zrt.