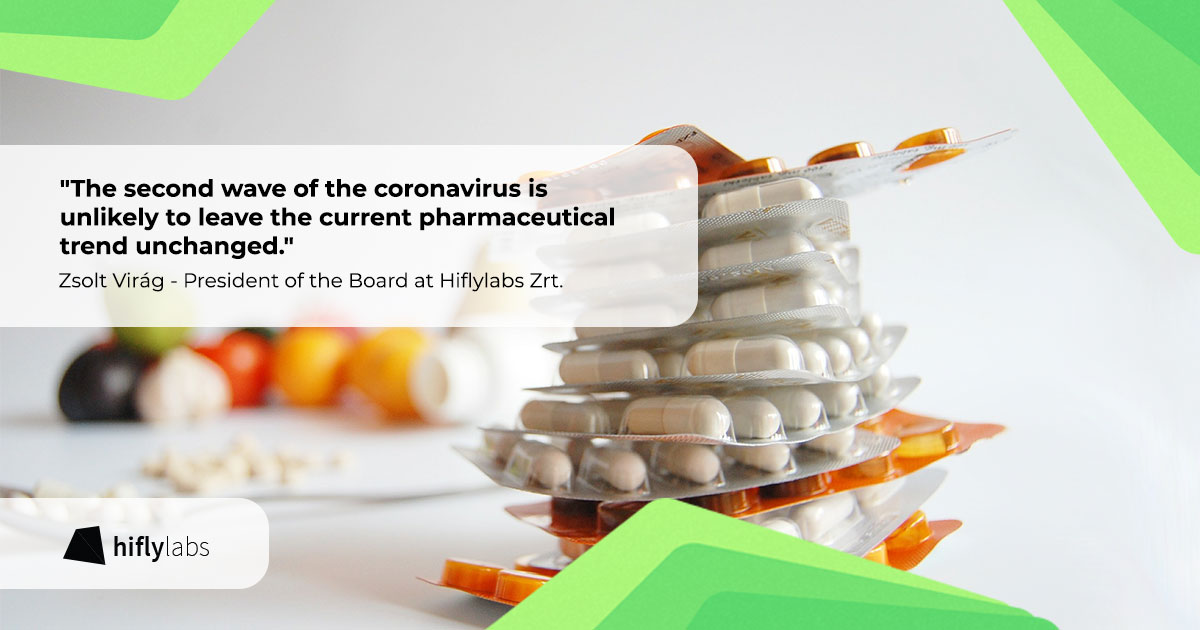 After the HUF 4 billion rise in June, the domestic turnover of subsidized prescription medicine increased by almost HUF 2 billion in July

In July, the turnover of prescription medication increased in all drug types practically, so after the low point in May, medicine were sold above average in domestic pharmacies in July. “July brought significant medicine sales in all respects. The sales of prescription drugs exceed the 2019 average, the same period of the previous year, and even values for June” starts Zsolt Virág, President of the Board at Hiflylabs, the company that completed the data analysis.

The increase in turnover can be said to be general not only in terms of periods but also in terms of product types. Both compared to the previous month and compared to the same period of the previous year, the vast majority of drug types has shown an increase. It is not yet possible to draw a clear conclusion from a month, but the general growth trend may also indicate a rearrangement of medicine use patterns.

Several factors contribute to the rise. On the one hand, the population was already moving more freely in July, and breaking with a socially distanced lifestyle could also be a common source of infectious diseases. At the same time, in the case of milder diseases, the postponed doctor’s visits in the spring may be the cause. “Interestingly, medicine sales are increasing even though seeing GPs is still more difficult than during the normal period, so in case of mild illnesses people might not use prescription drugs.” – says the expert of Hiflylabs.

A regional analysis of the data shows that the agglomeration effect is still going on, i.e. part of the capital’s traffic has moved around Budapest, but its effect is getting weaker month by month. In July, pharmaceutical sales were able to increase everywhere except in Pest County compared to the previous month, i.e. the weight of Pest County is lowering compared to the national turnover. Compared to the previous year, however, Budapest continues to stand out from the ranks of counties, as on an annual basis there is a 2.8 percent decrease in pharmaceutical turnover in the capital, compared to a 1.4 per cent increase in Pest County. Overall, therefore, there are still fewer purchases in the capital, but only a small part of this is reflected in the areas around the capital, partly due to seasonality.

Low capital numbers were strongly affected not only by the agglomeration effect but also by the summer holidays. In Somogy and Veszprém counties, both compared to the previous month and compared to July 2019, there is a significant increase in sales of around 8 percent. This is clearly since that extremely many people have spent their summer holidays around Lake Balaton.

Change in pharmaceutical sales in July compared to July 2019

Looking at product types monthly for systemic anti-infectives sales increased the most. This group includes, but is not limited to, antibiotics and antivirals. In the product group, despite the increase in July, the turnover can be said to be relatively low, at least the July turnover is 6 percent lower than the July 2019 value and is much lower than the 2019 average. Examining the trend in more detail, it can be said that the purchases of systemic anti-infectives are as usual in the season. Further growth to the current low but the rising value is also expected in the next period. The turnover of the product type is special in 2020 so that the turnover of antibiotics has reached a much lower level than usual in the spring, which is largely due to the spring distance measures. However, with the dissolving of restrictions and the increase in the number of social contacts, the number of bacterial infections has also increased rapidly, and the spread of herpes, for example, is also showing a similar trend. It is interesting to observe how drastically the restrictions introduced due to COVID, as well as loosening them, affect the spread of other diseases. The turnover of antibiotics and antivirals is expected to increase further in the coming period, as starting school will further increase the chances of the spread of infectious diseases.

“The second wave of the coronavirus is unlikely to leave the current trend unchanged.” – says Zsolt Virág. As in the first wave, for some types of drugs, future early purchases will increase traffic, while in less critical cases, patients may re-postpone doctor visits, reducing the purchase of certain prescription drugs. Overall, however, the size of the second wave and the extent of the restrictions will together determine the actual volume of sales. Although the second wave seems larger than the first, it is now less visible in the behavior of the population. As a result, the shift in drug purchases is not expected to increase as sharply as in March. However, if the coronavirus is raging intensely for a long time, the change in the medicine market may be strongly felt.

Szerző: Zsolt Virág – President of the Board at Hiflylabs Zrt.