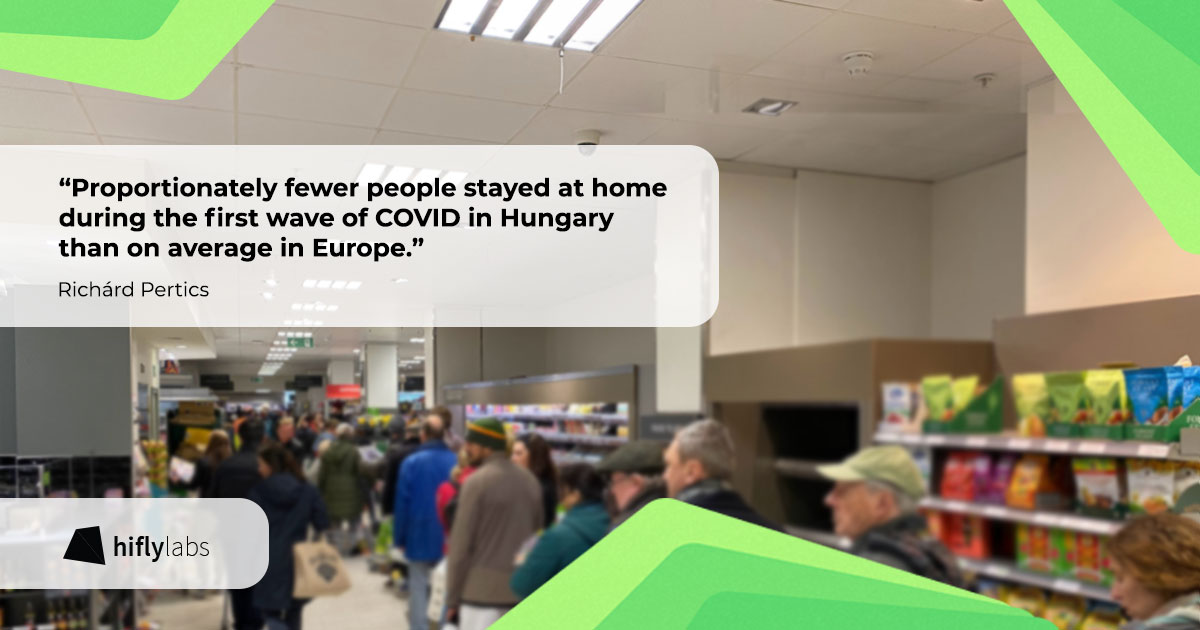 During the first wave of the epidemic Hungarians, compared the European average, spent more time working from the office and shopping, while fewer people stayed at home or visited parks.

In mid-June the Hungarian Parliament passed a law on the annulment of the emergency period due to the coronavirus epidemic as the epidemic curve in most European countries had almost completely flattened. At the same time Google continued to publish its COVID-19 Community Mobility Report, which provided information on users’ movement habits during the pandemic. Today, based on data from Google, we can analyze how people in different countries responded to the first wave of COVID-19.

As expected, the number of people staying at home and visiting parks increased both in Hungary and the European Union, as shown by Google. Time spent in grocery stores, workplaces, business outlets and on transportation services have all been shortened. However, realignment varied significantly from country to country. An average European spent more time at home or relaxing in a park than an average Hungarian, and the Hungarian population went to work and shopping proportionally more during this time period.

Official statistics by Eurostat also reflect Hungarians’ shopping habits. Domestic retail sales fell by an average of 5.2%in March-June compared to January-February at the beginning of the year. Among the examined European countries, retail stores in Hungary suffered the 7th least serious damages, which can be considered an outstanding result in the light of the more than 10% average decrease rate in Europe. Interestingly, store turnover in Norway even increased, in line with Google’s measurement that grocery store visiting remained almost unchanged in the Nordic country.

Change in retail sales due to coronavirus
(percent, changes in volume)

When it comes to Hungary, the more time spent at the office can be explained by the fact that some Hungarian companies were less prepared to adapt home office. Also, when compared to Western Europe, in countries surrounding Hungary – Czech Republic, Poland, Slovakia, Romania and Bulgaria – people worked more from the office.

Furthermore, in the above listed Eastern European countries, due to historical reasons, more people work in industry or agriculture, in which sectors home-office is rarely feasible. Of the countries surveyed, Romania employs the most in agriculture and industry: almost 43% of the working population is in these sectors. In Hungary, one quarter of people work in agriculture and industry, while the remaining three quarters are employed in the service industry. Comparing Hungarian data with the European average, we can see that the proportion of people working in the service industry in Hungary is about 10 percentage points lower. Examining the EU Member States as a whole, we can conclude that the structure of industry has a strong effect on the time spent at home, the higher the proportion of industry and agriculture is in a given country, the smaller amount the time spent at home increased by.

The proportion of employed in agriculture and industry as a proportion of total employment
(percent, the first quarter of 2020, in descending order)

Google user data also shows a significant decline in shopping activity, park visits, and commuting in southern and western European countries. Italy, Spain, France and the United Kingdom were hit the hardest by the pandemic, hence the large increases in time spent at home. Furthermore, human activity decreased in every non-residential area in these countries.

The coronavirus had the least impact on the northern and Baltic states, such as Sweden, Denmark, Latvia, and Norway. These countries showed the smallest change in movement habits during the first wave of the virus. Time spent at home grew slightly, while time spent in parks increased significantly.  Visits to other types of locations in these countries decreased less compared to western states.

Among European countries, Hungary is more comparable to the Nordic group. When it comes to shopping outlet visits, only Scandinavian countries and the Netherlands stand before Hungary. Fortunately, the time spent at home proved to be sufficient enough to help the economy recover more quickly in Hungary.

The strong correlation between data of EUROSTAT and Google’s statistics is a good indicator of how important modern technology and advanced analytics can be in measuring countries’ economic performance. Information provided by these companies are only a by-product of all their technical capabilities and solutions, but they are produced in real-time, and data collection is also much more efficient. In the future, the role of data processing and forecasting based on this type of information will certainly increase.