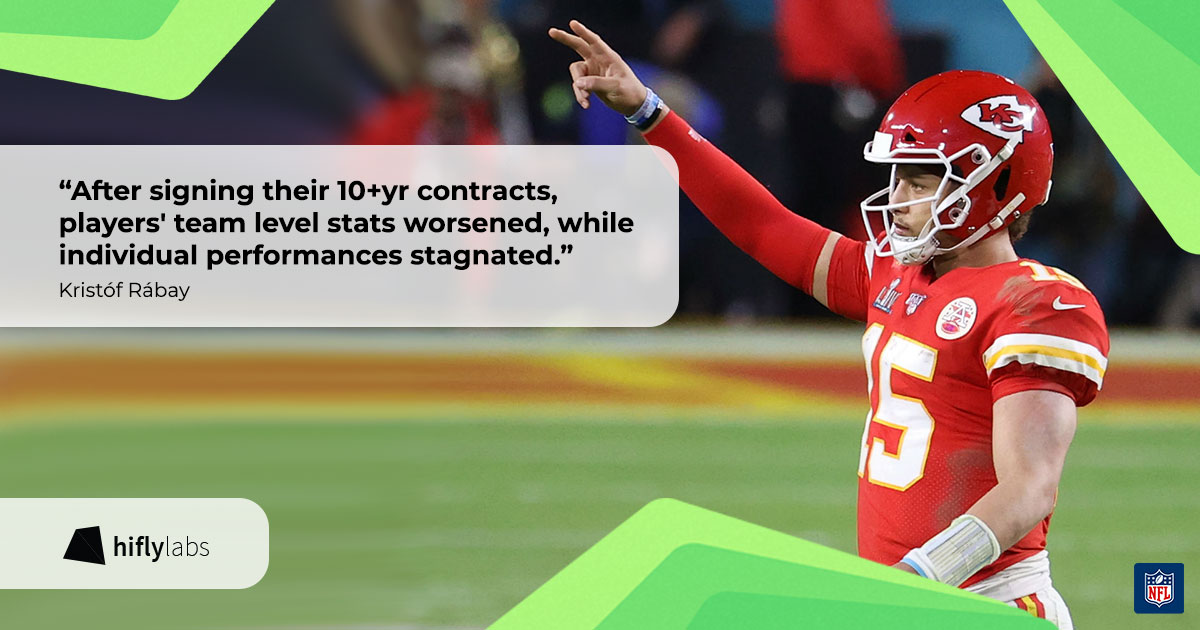 There have only been 5 players in the NFL so far to have received 10+ year contracts from their teams. Analyzing these players’ career stats we could conclude that team-level metrics worsened, while individual performance stagnated after signing the deals.

Patrick Mahomes is the 6th player to be receiving this ‘almost lifetime’ contract. The 24 year old QB in his first two (whole) seasons won the Offensive Player of the Year Award, the NFL MVP award, took his team to the Super Bowl and was awarded MVP of the big game as well. In his first 36 career games he has proven to Kansas City that he’s worth $450m over 10 years.

How had their performances evolved after signing the contracts? What tendencies can we see in their stats? What did they put on the table to be given such long-term deals, and was it really worth from their teams’ perspectives?

What’s worth looking at before everything else is their careers in terms of teams and years played for.

Without exception all of them have changed teams, even though the whole reasoning behind such long-term thinking was to keep them there ‘for life’.  Not to mention that only Favre and McNabb stayed in the NFL for 10 years after the time of signing.

It took Favre and Bledsoe 9 and 8 years respectively to get their teams to want to lock them in, the others played 3-4 years before being given the contracts, while it took only 2 years for Mahomes to find himself in this position. Just an interesting pattern from the above timelines: it seems as if there was a ‘golden era’ of 10+yr contracts around the millennium, and 15 years have gone by without any team committing to a player for such a long time.

Looking at the annual average salaries, neither inflation, nor the rate of the ever-increasing NFL QB contract values can explain Mahomes’ bank-breaking deal: by making $45m a year, the young talented kid absolutely raised the level of new star QB’s potential worth. 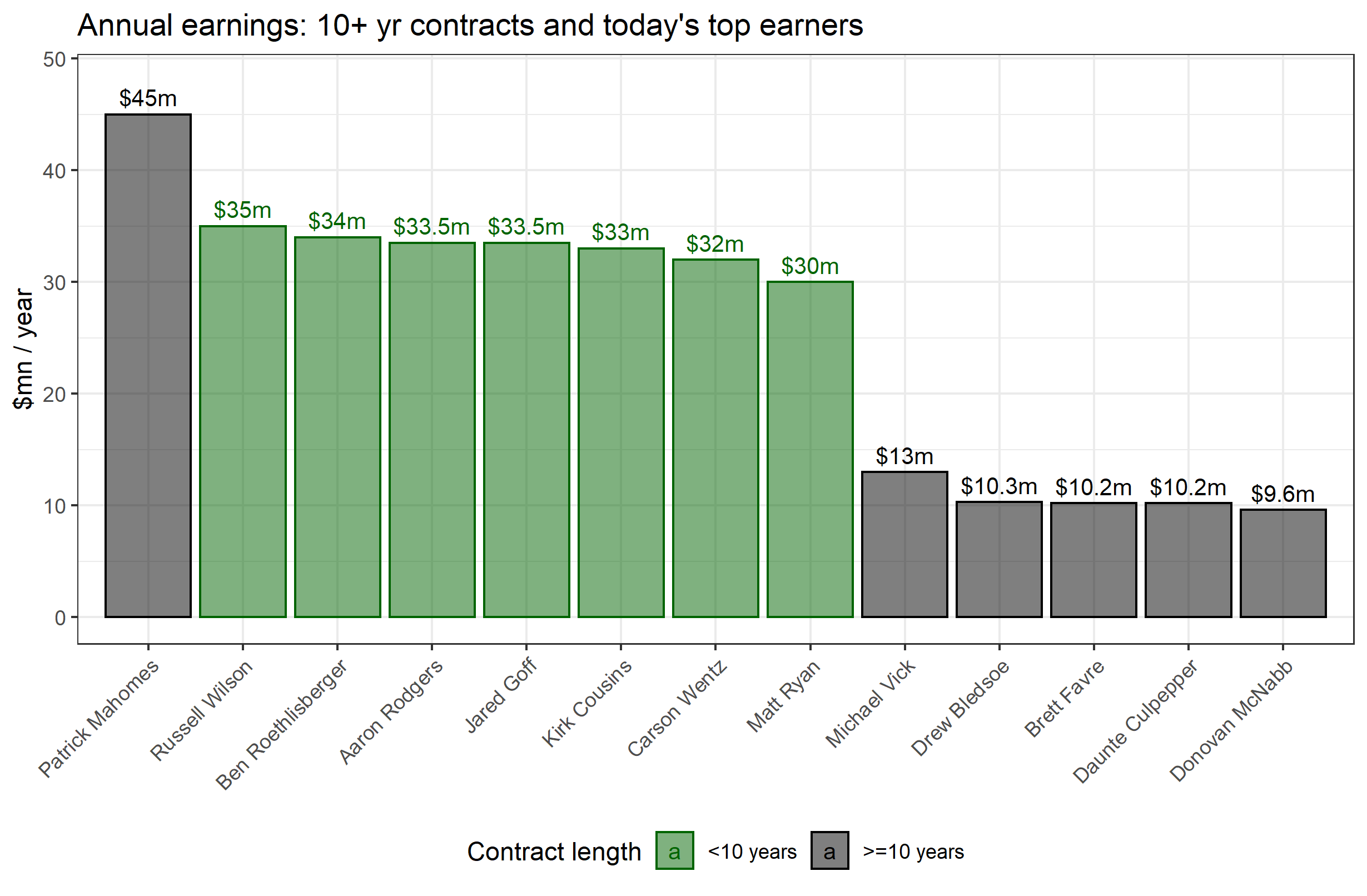 Salaries of players previously receiving 10+yr deals seem like a petty change compared to what the best-paid QBs make today, who also seem to be ‘part of the middle class’ when comparing them to Mahomes’ income.

In the following analyses we’ll only be looking at performances and stats of players who received 10+yr contracts. As all of them are QBs, it would be a logical step to first take a look at their passing stats. However, in terms of passing, the only interesting pattern is Mahomes’ superiority. In most of the usual passing metrics, Mahomes far outperformed the others. 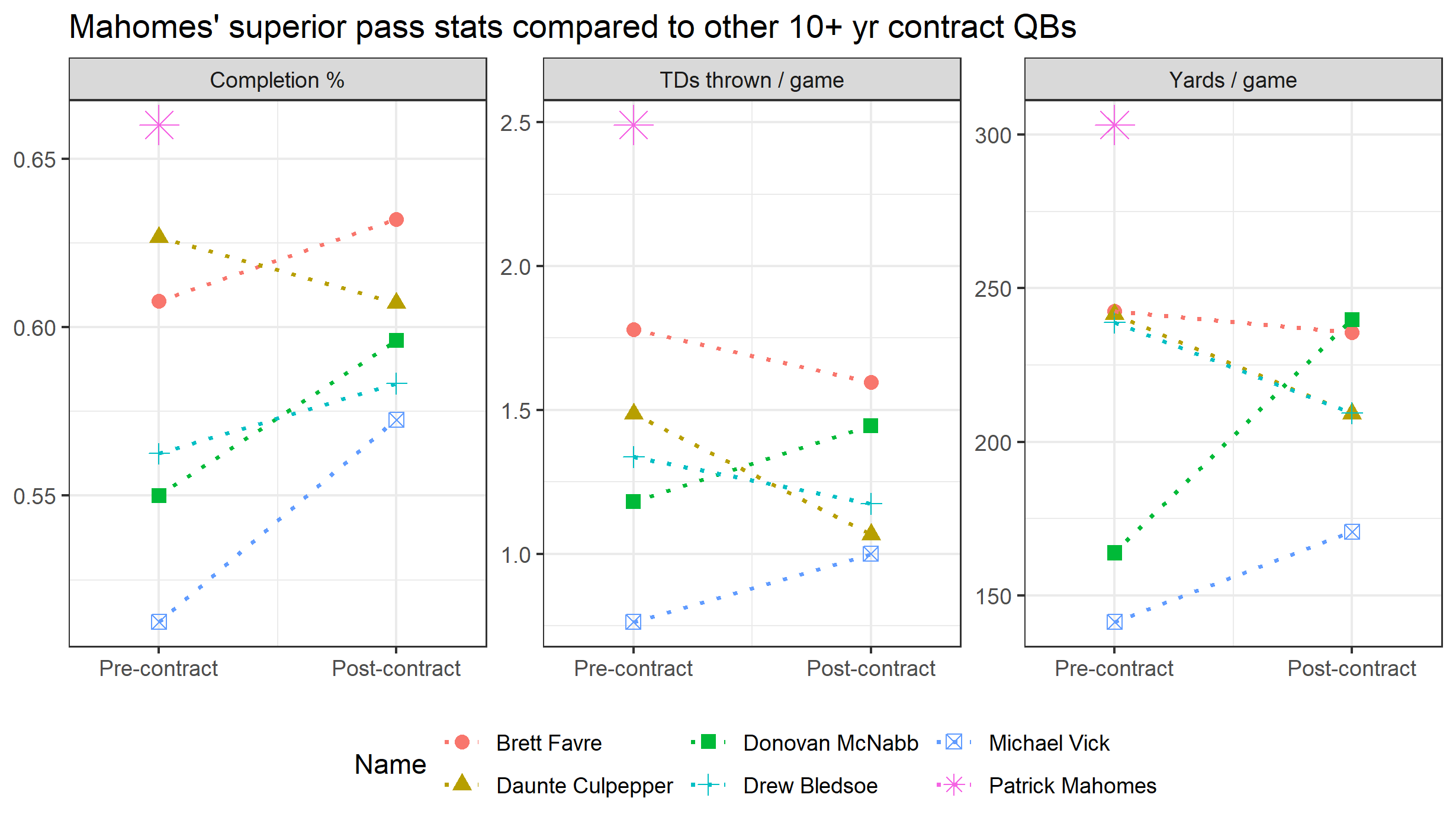 With the exceptions of Favre and Bledsoe, all players made running an important part of their game. So does Mahomes, it seems so far. 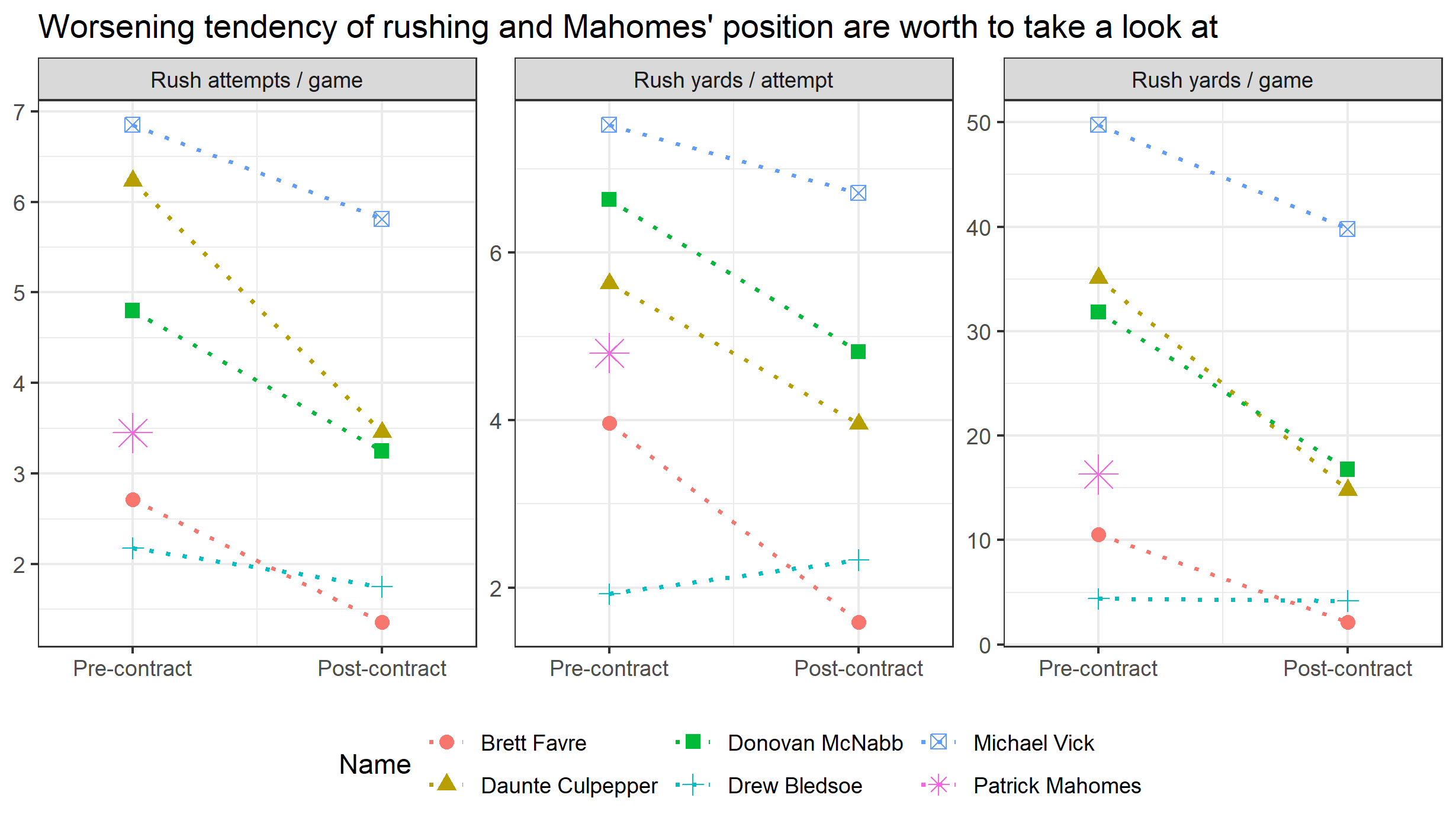 Looking at the rushing stats, a worsening performance level can be said of everyone: rushing attempts, yards/attempt and therefore yards/game all seem to have decreased by a great amount after signing the contracts.

Some may wonder though, is it possible that the worse rush stats are because players just threw more with time? The answer is yes, as, after the signing of the contracts, players continuously turned to passing instead of rushing. The pass attempts to rush attempts ratio seems to be increasing for all of them. 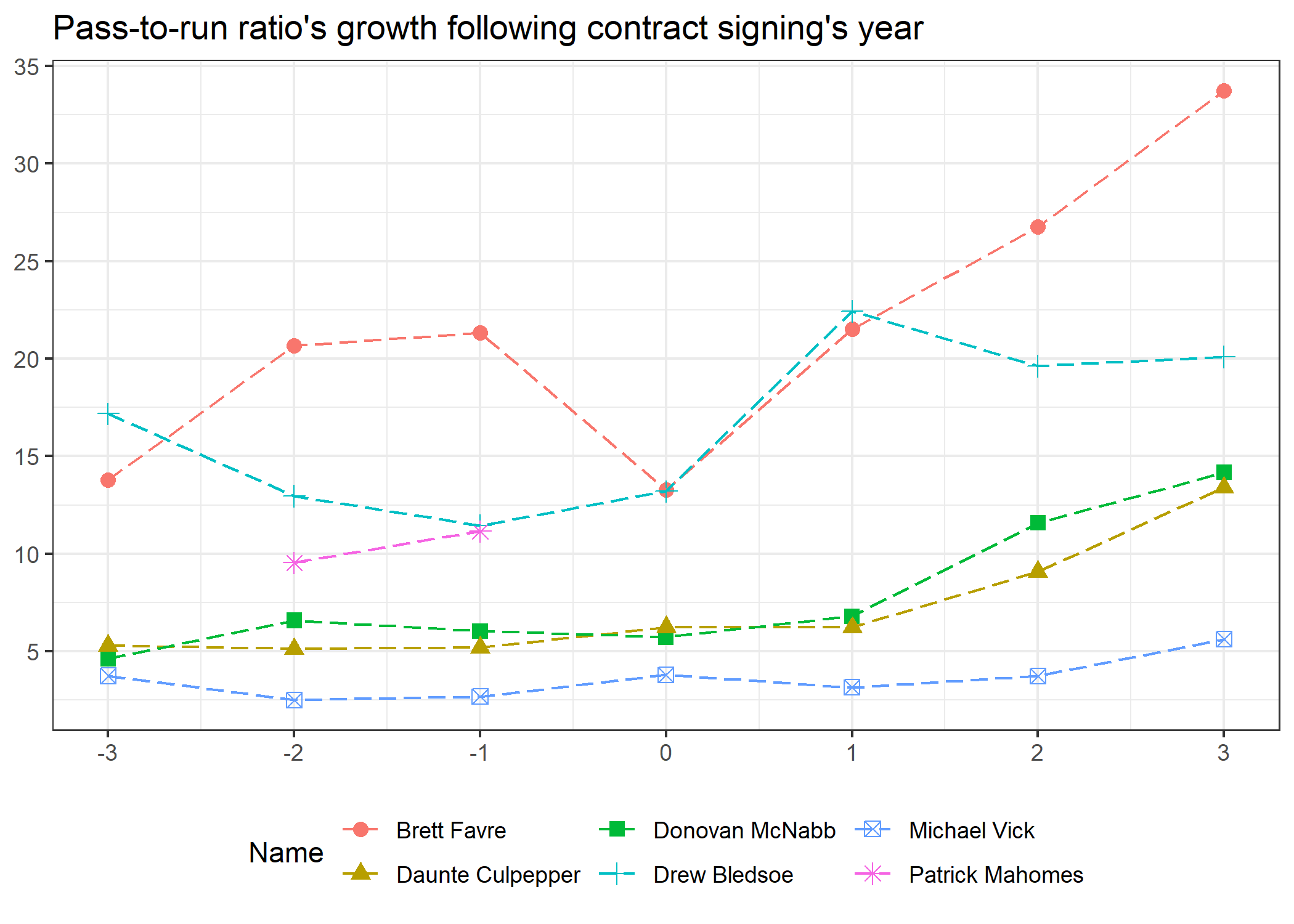 It is really interesting to see Mahomes’ position: he is between the Bledsoe-Favre duo and the Vick-Culpepper-McNabb trio in every aspect. NFL fans may wonder how Mahomes will adjust his game. Will he be passing more, running more, or keeping a constant and healthy ratio of the two?

Other than looking at player performances, such as passing and rushing, team-level metrics are just as important when trying to determine whether or not such long-term deals are worth it from the teams’ perspectives. 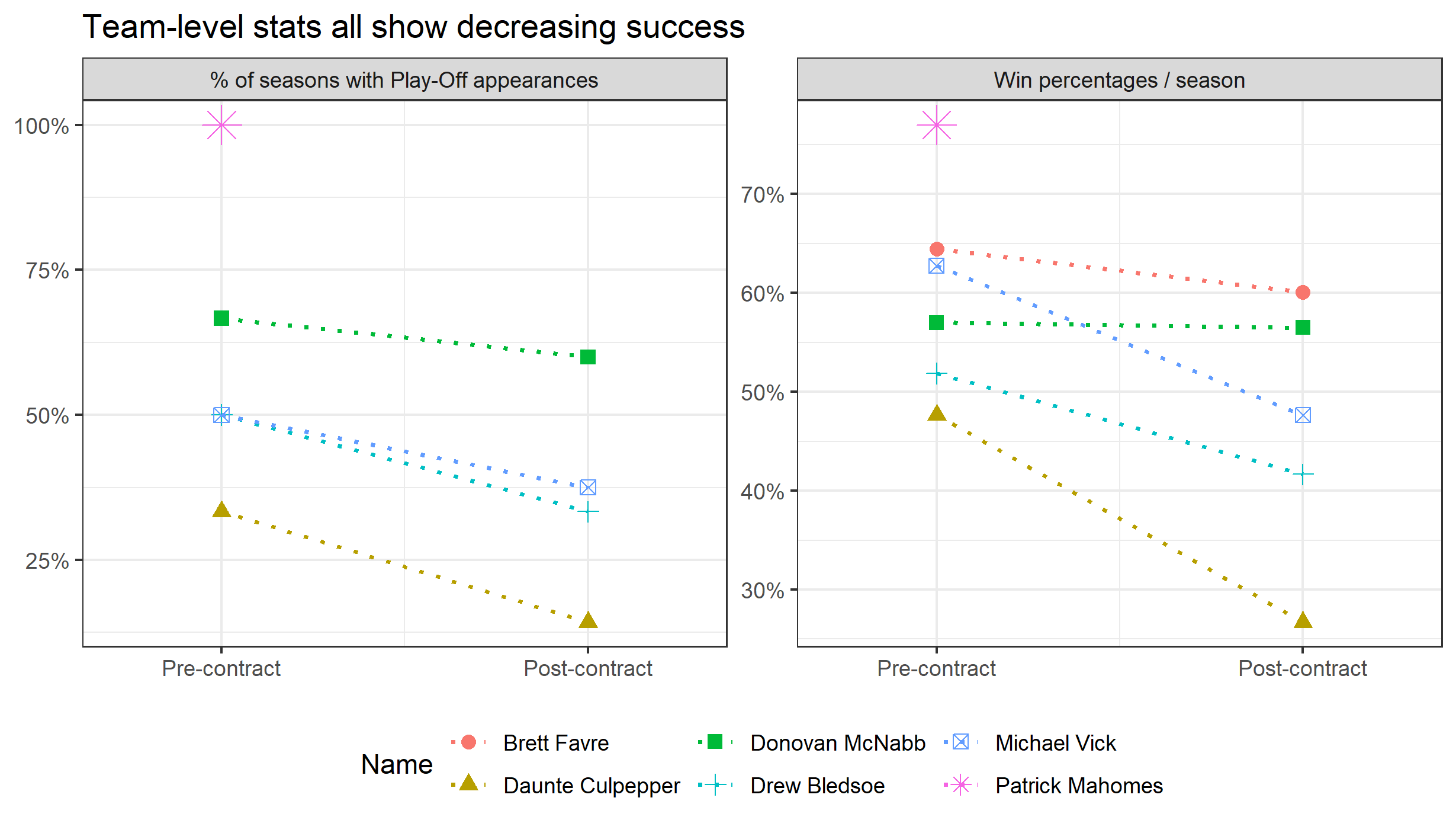 The tendency is clear: after signing the 10+yr contracts, teams’ win ratios have decreased or at most stagnated. As the QBs won fewer games for their teams, the teams’ chances at playoff spots have also worsened. The ratio of seasons in which the teams who these players played for decreased without exception.

Mahomes broke the bank with a win ratio of some 80%. To keep up such a success seems almost impossible, however, Mahomes and the Chiefs may be motivated by what Tom Brady was capable of doing: keeping a 75+% win ratio throughout his Patriots seasons. Mahomes may even want to – and is expected to – follow Brady’s footsteps in terms of success, records and built image and respect.

Other than outlining the worsening chances of PO appearance, it’s important to mention the Super Bowl. Only Favre and Bledsoe have taken their teams to the big game  – Favre came out a winner, Bledsoe lost – before signing the long-term contracts, while after inking the big deals only McNabb was able to lead his team there, but even he could not win it. Bledsoe did receive a ring for the Patriots’ 2001 title run, but it’s common knowledge that he had really no part in that season.

In summary, we can draw 3 main conclusions after analyzing the numbers.

Within this first part of our NFL blog-post series we analyzed performances of players who were given 10+yr contracts before and after signing them. We have not covered the financial aspect of it, however in the future, we’ll be planning to post articles regarding positional spendings, salary increasing rates, and trends, metrics that seem to have an effect on teams’ overall success. We’ll try to synchronize posting times with the important dates of the 2020 NFL season.

We have used data from https://www.pro-football-reference.com/ for our analyses.
Blogvizual