Hiflylabs completed an assessment with their partner, BENU, the leading pharmacy chain in Hungary to reveal changes in habits of drug usage. Some of the main conclusions of this work is summarized in the following article. 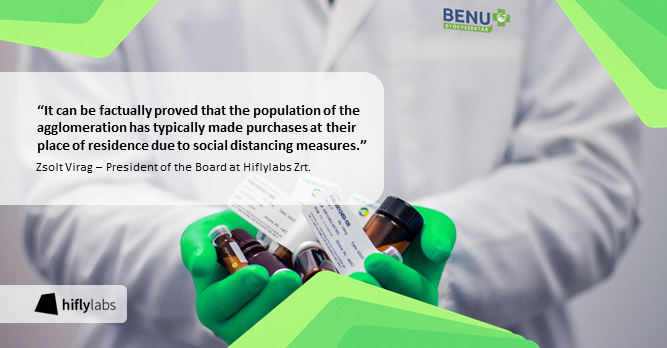 More than 30 percent increase in prescription product sales in March. The coronavirus also has a strong impact on medicine use habits.

It was expected that during the epidemic, health expenses would increase, but the increase in medicament sales still appears to be significant in March. The total monthly revenue of domestic pharmacies – in terms of subsidized prescription drugs – has been around HUF 45 billion in the last year and a half, but in March 2020 it approached HUF 60 billion. Turnover in March is 30.5% higher than in February and even more so than in the same period last year. The increase in prescription sales is also noticeable because the population can only get these products with the help of a doctor, so the increased purchase does not appear to be unjustified.

It is clear from the data  that a lot of people bought several months of medication in March as a result of the restrictive measures. 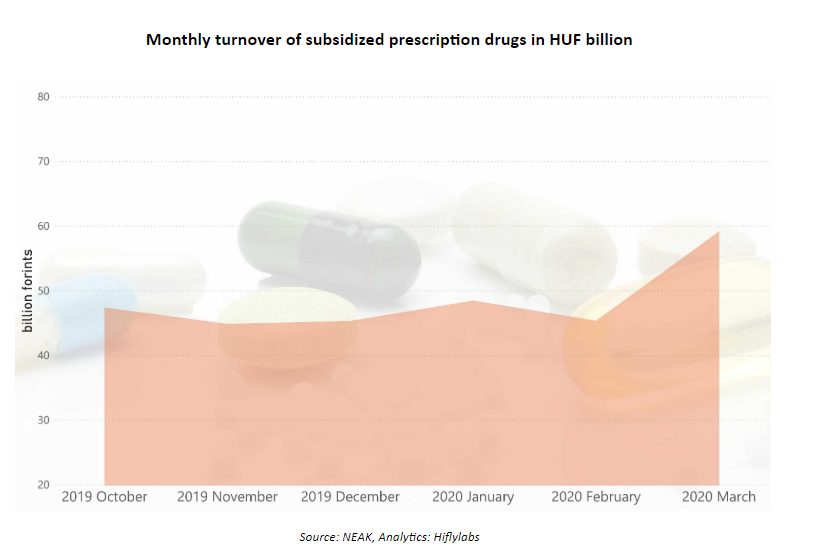 However, the increase in sales shows significant differences for different medicine categories. The highest increase is seen in products that affect metabolism. This group includes, for example, insulin preparations and antacids. Respiratory drugs for asthma, among others, increased at almost similar levels, but sales of antihypertensives and cholesterol-lowering drugs were also notable. Purchases registered for these product types showed an increase of more than 40% during March 2020. 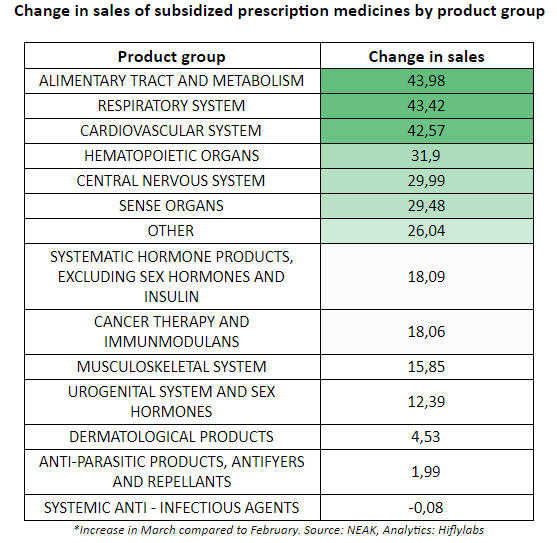 Overall, sales of all product groups have increased, but purchase of products skipping of which leads or could lead to immediate complaints or health damage have increased the most. In contrast, the consumption of some less critical product types did not change significantly.

When examining specific products, it can be seen that the sales of some products more than doubled, but these are usually technical effects related to stock and product replacement, not entirely due to the change in consumption caused by the epidemic. However, without taking into account the technical effects, preparations with an increase in turnover of more than 50% can be identified. Examples are some prescription vitamin D products or some antihypertensives.

Based on the sales data of BENU Magyarország Zrt, it can also be identified that the sales of non-prescription pharmaceuticals also increased significantly in the spring. “We have seen a remarkable increase in sales of painkillers and antipyretics, vitamins, and throat disinfectants, however, the increase can be said to be temporary, with April data already showing a decline, confirming that many bought prescription and non-prescription drugs several months in advance.” – says dr. János Zlinszky, CEO of BENU Magyarország Zrt.

Changes in sales data also show significant differences in regional terms. Although the turnover of prescription medicines increased significantly in all counties, while the increase was “only” 26%  in Somogy county,it was more than 36%  in Pest county.

Interestingly, growth in Budapest is as low as 27%. A deeper examination of the changes clearly showed that the lower growth in Budapest is due to the effect of the agglomeration. “Based on the data, it can be factually proved that the population of the agglomeration has typically made purchases at their place of residence since March due to social distancing measures and home office.” – says Zsolt Virág, President of the Board at Hiflylabs Zrt., the company that completed the data analysis.

Zsolt Virag – President of the Board at Hiflylabs Zrt.