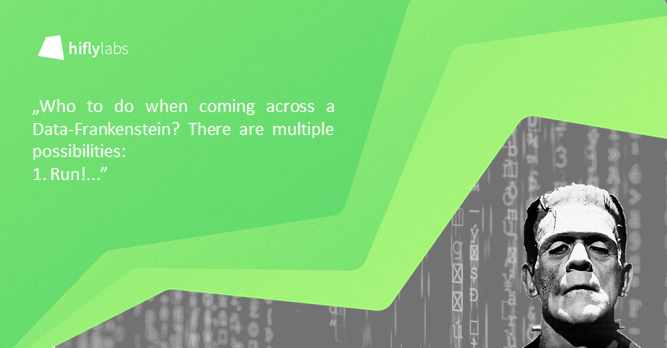 The hero of this story is a fictional character, any resemblance to reality is NOT accidental.

The idea of this post is coming from a beer (well, beers) with friends where we came across the topic of data munging (data-preparation by birthname) and how much misery it can be. Laughing, we bid on each other by throwing in wilder and wilder data quality monsters because of which we used to tear out our hair during the projects. We reached a point when we could see the Data-Frankenstein materialising in front of our – bit clouded – eyes. Here are the most important attributes of the monster to make it recognizable for those unfortunates who run into it:

Here comes the question: What to do when coming across a freak like this? There are multiple possibilities:

Ps.: We thought about creating a dataset like this artificially but realized that it is actually a complex task. After all, the systems creating these data monsters were developed for many years.

Hiflylabs creates business value from data. The core of the team has been working together for 15 years, currently with more than 50 passionate employees.